How big is a gap?

When teaching dual carriageways, one of the questions I ask pupils concerns the distance between our car and the vehicle in front.  The question is simple "What distance should you be from the vehicle ahead?"  Some respond very quickly, some after a little more thought.  Regardless of the time taken, most get it wrong!  Some people suggest 2 car lengths, some 10 car lengths, some suggest 2 chevrons (difficult if they're aren't any), some even try 'about this far' as an answer.  No-one ever tries to recall the stopping distance according to the Highway Code - just as well because that is wrong too.  Occasionally one will get the answer right.  Before I give that answer, what do you think it should be?

Enough time to think.  Strangely the answer doesn't relate to car lengths, stopping distances or any measure of distance at all.  It is actually measured in time.  The correct distance, assuming dry, good quality roads, is 2 seconds.  By simply counting after the vehicle ahead goes past a fixed point e.g., a sign until you go past the same sign.

Just to give some idea of how far it is, here is a picture of a 2 second gap at 50 miles per hour. 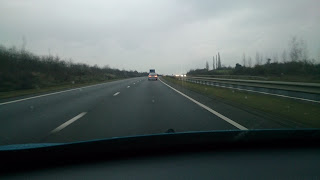 That looks pretty reasonable doesn't it?  If he stops suddenly, I will be able to stop in time.  Comfortable! 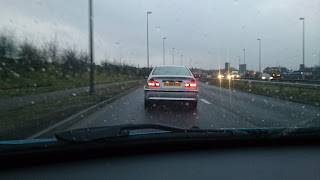 If he brakes, I've had it!  The two car lengths is probably just about enough time for me to realise that he's braking and I'm going to hit him.

Every day, I see many, many people leaving this gap, 2 car lengths, between them and the vehicle in front.  It is at epidemic proportions on the A2 and even scares and accidents don't seem to make people wary enough to back off.

So, perhaps it is time to look at your following distance, maybe with fresh eyes and understanding, so that you maintain a decent, safe distance from the car ahead.

Note: These photos were taken in a controlled environment by a front seat passenger following extensive planning and agreement on the process between the drivers of both cars.  No laws were broken and safety was never compromised.  We know that with the deterioration of the weather on this occasion the 2 second distance was not sufficient and in fact we should have been further back.

www.ashleyschoolofmotoring.co.uk
Posted by Ashley School of Motoring at 20:50 No comments: